Rutherglen MSP Clare Haughey has blasted changes to Universal Credit which may see elderly people with partners of working age losing up to £7,000 a year.

The new rules which will come into force on 15 May will mean new pensioners can no longer claim Pension Credit if their partners are younger than the state retirement age. Mixed age couples who are already claiming pension age benefits will not be affected by the change.

Under the existing process, married couples can transition from working age to pension age benefits as soon as the oldest spouse reaches state pension age.

A UK Government spokesperson said the changes were part of their plans to “modernise the welfare system”.

Rutherglen MSP Clare Haughey, who is a vocal critic of the Universal Credit system, said the changes showed “the contempt the UK Government has for elderly people” adding it could be a “double whammy” for local WASPI women.

“When everyone at Westminster was concentrating on Brexit, the UK Government sneaked out damaging Universal Credit changes, and many who could be affected may not yet be aware.

“For new pensioners whose partners are younger than the state retirement age, they will no longer be entitled to Pension Credit and will be forced to claim the much less generous Universal Credit. This change means some couples could be £7,000 per year worse off whether their claim falls a day before or a day after the May deadline.

“This is an absolute outrage, and it is further proof of the contempt the Tory Government has for elderly people.

“The news will be very shocking to many of my constituents, but particularly so to the WASPI women who have already had thousands of pounds of their pensions stolen by UK governments.”

WASPI are a campaign group urging the UK Government to investigate transitional measures for 1950s-born women who have been hit by the equalisation of the state pension age, a change which began in 1995 and was compounded in 2011.

Burnside resident Anne Potter, who is the co-ordinator for the WASPI group in Glasgow and surrounding areas, added:

“These changes could be devastating for many WASPI women who are already facing real hardship due to the rapid acceleration of the state pension age.

“I’ve heard from women who believe they have lost around £30,000 already because of the way UK Government’s equalised the retirement ages, faster than promised and often without notice, and for there to be a possibility people could lose a further £7,000 is disgraceful.”

Below is a photograph of Clare Haughey MSP with local WASPI women at a meeting in Spittal last year. 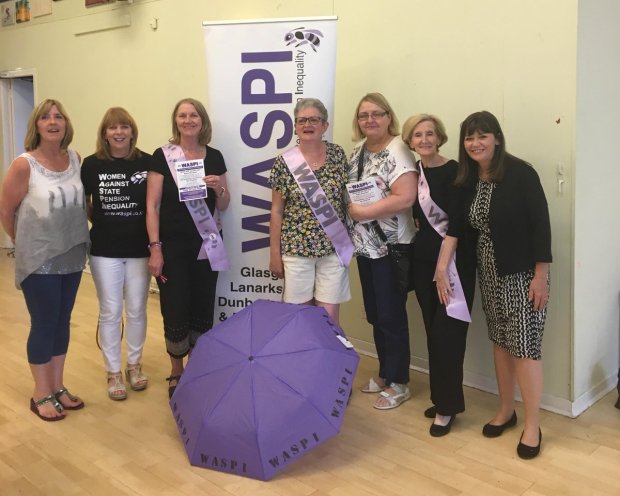 Further information, including the rates of Universal Credit and Pension Credit, can be found on the link below: