The Unpaid Trial Work Periods (Prohibition) Bill, which has been put forward by Glasgow South MP Stewart McDonald, will legislate to ensure people are paid for any trial period worked, regardless of whether or not a full offer of employment is provided afterwards. Such practice is common throughout the UK, particularly in the hospitality sector, and over half of the respondents to the Bill’s consultation either had themselves or knew someone who had been asked to work a trial period.

Since its launch in July of this year, Mr McDonald’s campaign has earned the support of parliamentarians from different parties and has the backing of the Scottish Trades Union Congress, National Union of Students, and Better Than Zero campaign.

“Unpaid trial shifts are exploitative to workers – particularly students, young people and migrants. If someone is required to work a trial period before securing a position, then they should be duly paid for doing so.

“Prior to the launch of his Bill, Stewart heard about a company in Glasgow who were allegedly asking potential staff to undertake 40 hours of unpaid work before they could be considered for employment. Clearly, this is not fair and cannot be allowed to continue.

“Any work undertaken should be paid for fairly and properly, and that is why I support the Bill to ban unpaid trial shifts.” 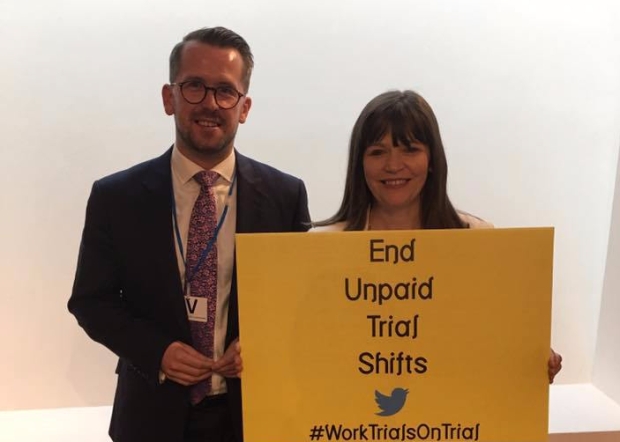 Photograph of Clare Haughey MSP with Stewart McDonald MP at a Scottish Parliament event for his Bill this month.

A graphic on the Bill’s consultation responses can be found here:
http://www.stewartmcdonald.scot/news/worktrialsontrial/unpaid-work-trials-consultation-results/

Further information on the MPs who are supporting the Bill can be found here: https://www.commonspace.scot/articles/11355/no-tory-support-proposed-bill-outlaw-unpaid-trial-work-periods

Further information on the company in Glasgow allegedly asking potential staff to work 40 hours without pay can be found here:
http://www.eveningtimes.co.uk/news/15114156.Mooboo_Bubble_Tea_faces_outrage_after_asking_workers_to_do_unpaid_work_before_being_considered_for_job/