Rutherglen MSP Clare Haughey caught up with a Burnside constituent in the Scottish Parliament for an event held to re-energise a women’s pensions campaign.

Anne Potter set up the WASPI Glasgow, Lanarkshire, Dunbartonshire and Renfrewshire group to urge the UK government to investigate transitional measures for 1950s-born women who have been hit by the equalisation of the state pension age, a change which began in 1995 and was compounded in 2011.

There are over 5,000 women affected by the repeated state pension age increases across the Rutherglen and Hamilton West UK Parliament constituency.

“We have paid our national insurance contributions in the expectation that we will receive a state pension at a certain age, however sadly this has not been the case. The state pension is not a benefit; it is a social contract with the people.

“I will continue to fight for justice for all women affected by this. It is scandalous that the UK government can ride roughshod over thousands of women who have paid into the system.

“The WASPI campaigners are extremely grateful for the support offered by MSPs, and the debate and event held in Parliament were excellent.”

“The WASPI activists have campaigned brilliantly over the last few years against their unfair state pension acceleration. It is great to see a Burnside woman leading the charge, and Anne has been influential in making more people aware of this injustice.

“Whilst the UK Government is consumed by Brexit, they are leaving important issues like this to the side and it has run on for far too long. It’s vital the campaigners keep up their fight, even during these challenging political times, to ensure WASPI remains high on the agenda.”

Below is a photograph of Clare Haughey MSP with Anne Potter, the co-ordinator of the WASPI Glasgow, Lanarkshire, Dunbartonshire and Renfrewshire group, at the Scottish Parliament – taken 3rd April 2019. 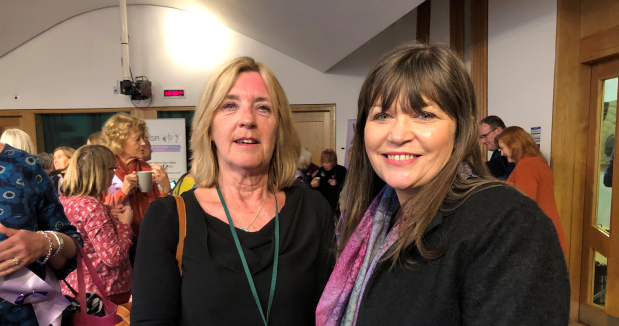